The protagonist of today: Cipolla, the Italian onion.

From the novel “The adventures of Cipollino”, a novel for children.

Cipollino was the son of Cipollone and had seven brothers Cipolletto, Cipollotto, Cipolluccio and so on, all names are suitable for a family of onions. Good people, it must be said right away, but rather unfortunate. What do you want, when you are born cipolla (onion), tears are at home.

Did you know that …

It is not convenient to keep the onions together with the potatoes, as onions tend to absorb the moisture, which maintain the potatoes fresh longer!

There are specific glasses to cut onions without crying: they have a coating that occupies the space between the frame and the skin of the face thus isolating the eyes.

The “onion goggles” are on the internet at a price of less than 20 Euros or you can use the classic swimming glasses.

An easy way to avoid tearing while peeling onions is to cut them under running water.

Thanks to “Quercetin” contained in onions, they are very useful therapeutically as anti-oxidants.

Red onions are good for preventing cardiovascular disease because they fight the bad cholesterol. They are also great for healing.

If you ate too much onion and fear for your breath you can eat a leaf of basil, or alternatively you can use coffee beans.

In ancient Rome, onions were used, as an ointment by gladiators, but were also one of the main foods that constituted their diet along with vegetables, fruits and cereals.

The onion came to America thanks to Christopher Columbus who imported it from Haiti in 1493.

At the level of cosmetics, onions are used in the prevention of hair loss.

During the Middle Ages, onions were used even as a bargaining chip that were able to replace hard cash.

The old pocket watches were once called “onion”.

The Zibelmärit, in Bern is a market dedicated to onions that takes place the last week of November. The record for the world’s largest onion belongs to retired Englishman Peter Glazebrook, that after more than two decades has managed to cultivate an onion with less than 76 cm in circumference and weighing 8,136 kg. Congratulations! 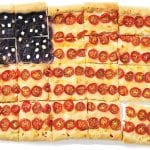 When a pizza becomes a piece of artBlog, News 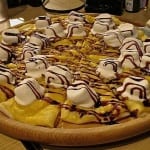